Indonesia’s Torajaland: Where Death Is the Most Important Part of Life

Blog, Photo, Thoughts
Torajaland, or Toraja for short, is located on the island of Sulawesi, Indonesia.  Most people have never even heard of this island.  It is an amazing place that’s very much off the beaten path.  The indigenous group who inhabit this area of the island are known as the Toraja people.  They are well known for their elaborate, multi-day funerals, and other outlandish death rituals. In 2019 I spent 3 weeks traveling through Sulawesi.  While in Toraja I met a guide who took me around the village on the back of his motorbike.  There was much to be seen and much to be explained… 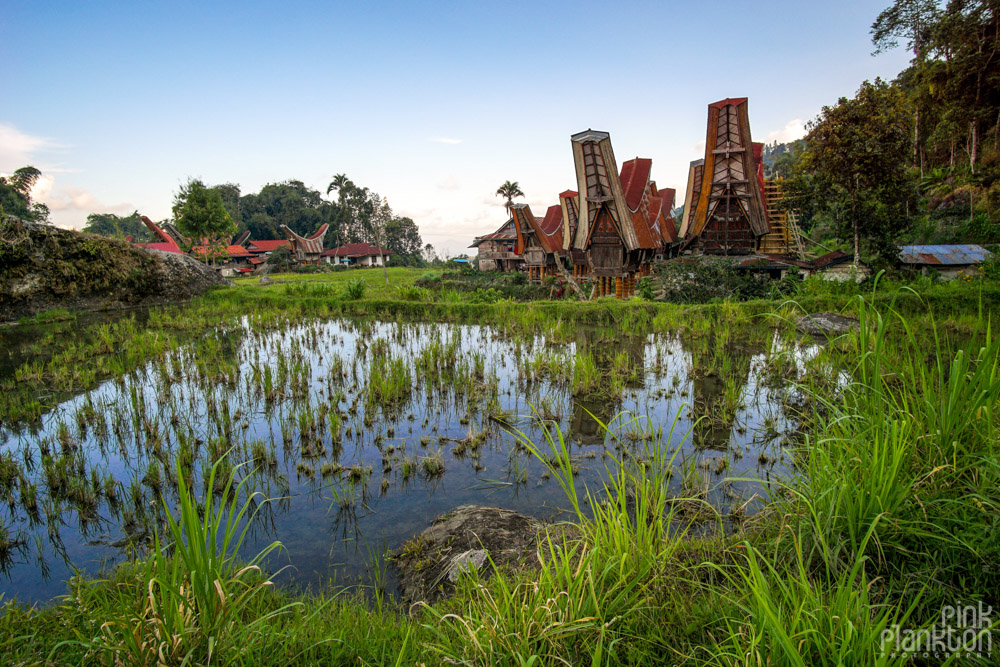 The village is absolutely beautiful.  You are surrounded by hills, rice paddies, and tongkonan - the traditional houses of the Toraja people.  They are boat-shaped because they believe their ancestors arrived by boat. 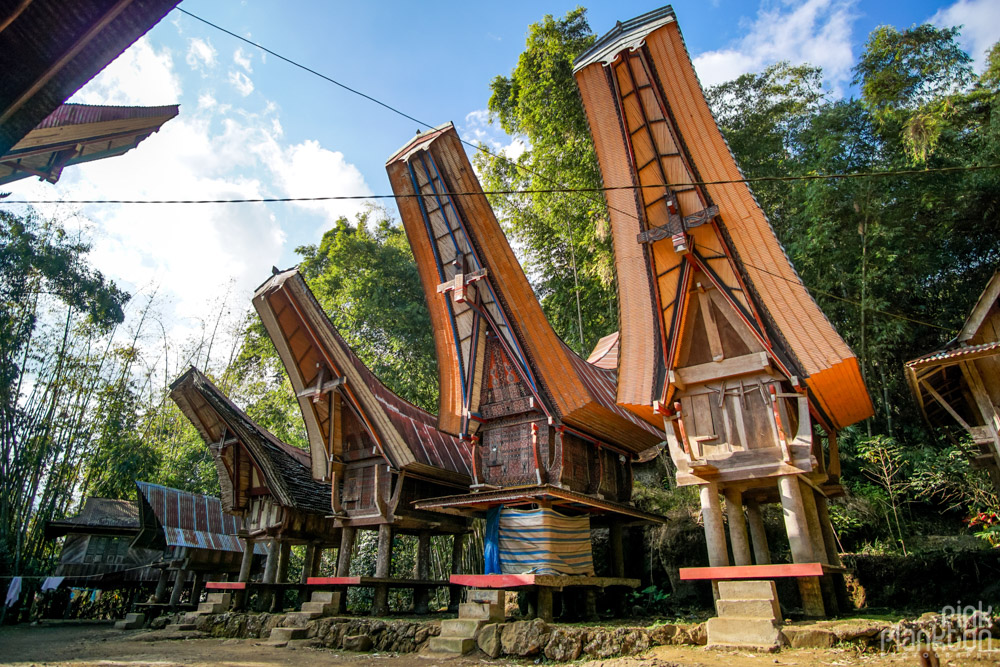 A closer look at the tongkonan houses.  They are also used to store rice.  They keep the rice elevated and away from pests.  The number of tongkonan a family has is also a sign of their wealth. 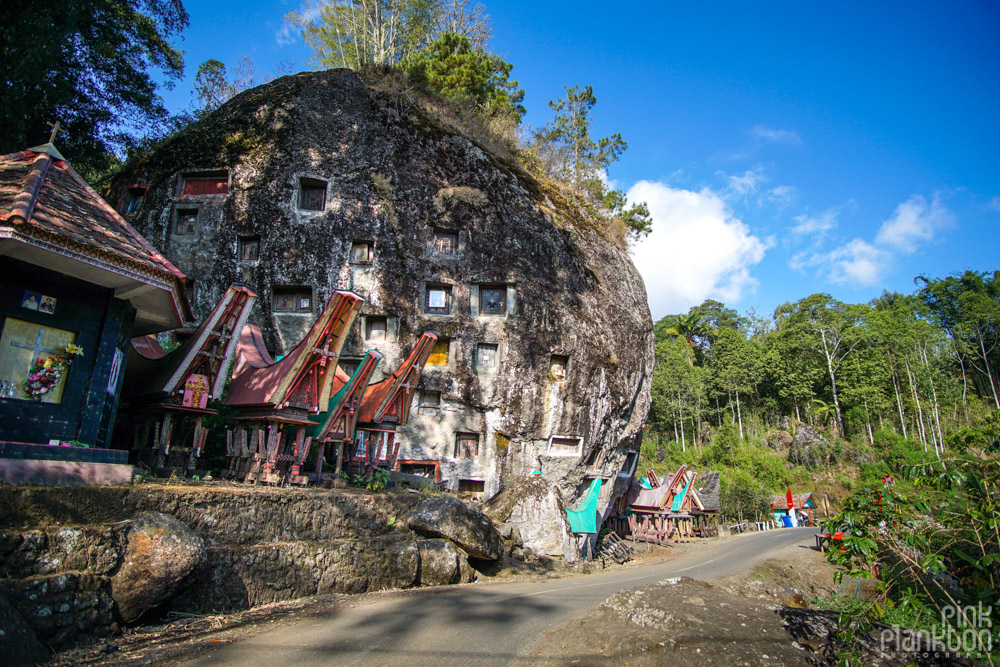 This huge boulder is actually a stone grave known as Lokomata.  The squares you see are holes carved out of the rock, where the dead are laid to rest.  Before this happens the body may stay in the family's house for years as the family prepares for the funeral ceremony.  The Toraja believe that after death the spirit stays with the body, and so the body needs to be taken care of.  I highly recommend reading National Geographic's When Death Doesn’t Mean Goodbye, as it does a much better job of explaining all the fascinating death rituals.

These small tongkonan are used to carry the dead to the grave site, and are left there after the ceremony. 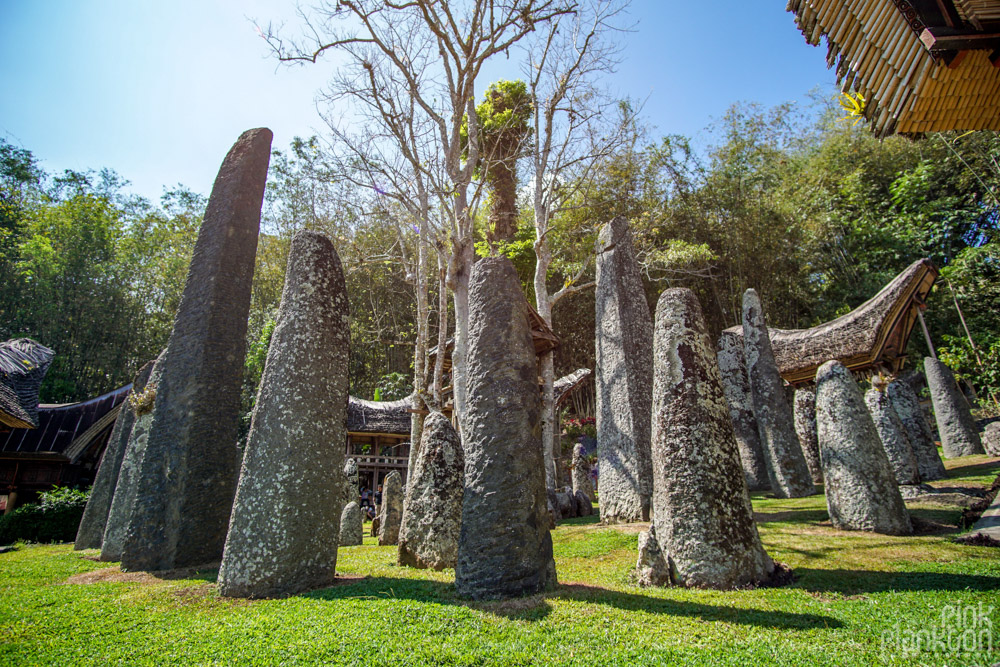 This is another burial site known as Bori Parinding.  They really like using stones as graves!  As you can imagine, it was not easy to get these huge pillars there.  This site belongs to a very noble and wealthy family. 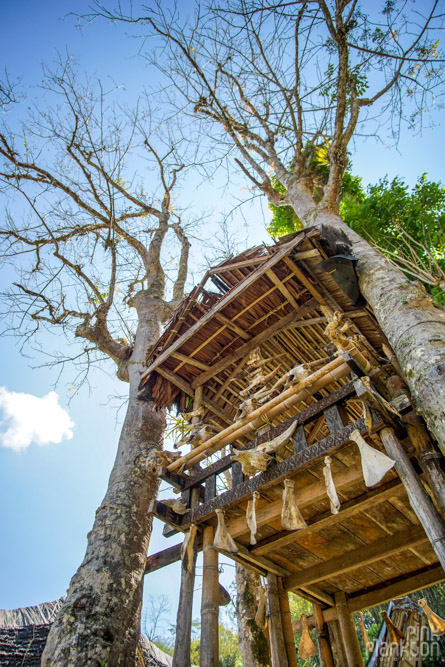 Hanging here you can see the bones of the animals that have been sacrificed (more on that below). 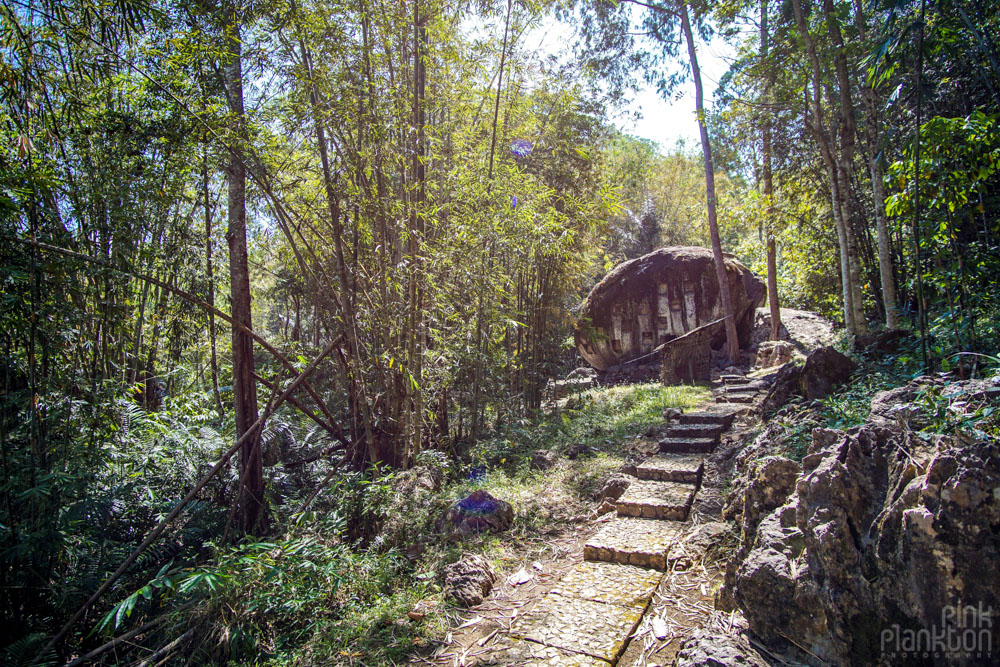 If you wander around to the back, there are more traditional looking stone graves.  Every so often the dead are taken out of their tombs to be cleaned and redressed during what is known as a Ma'nene ceremony. 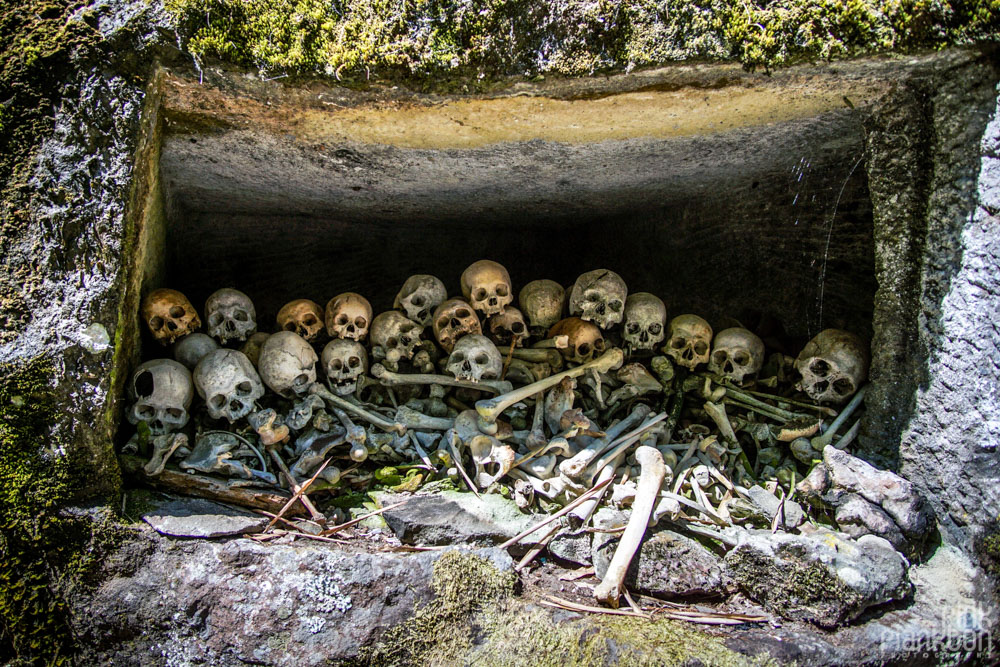 Skulls and skeletons are on display here. 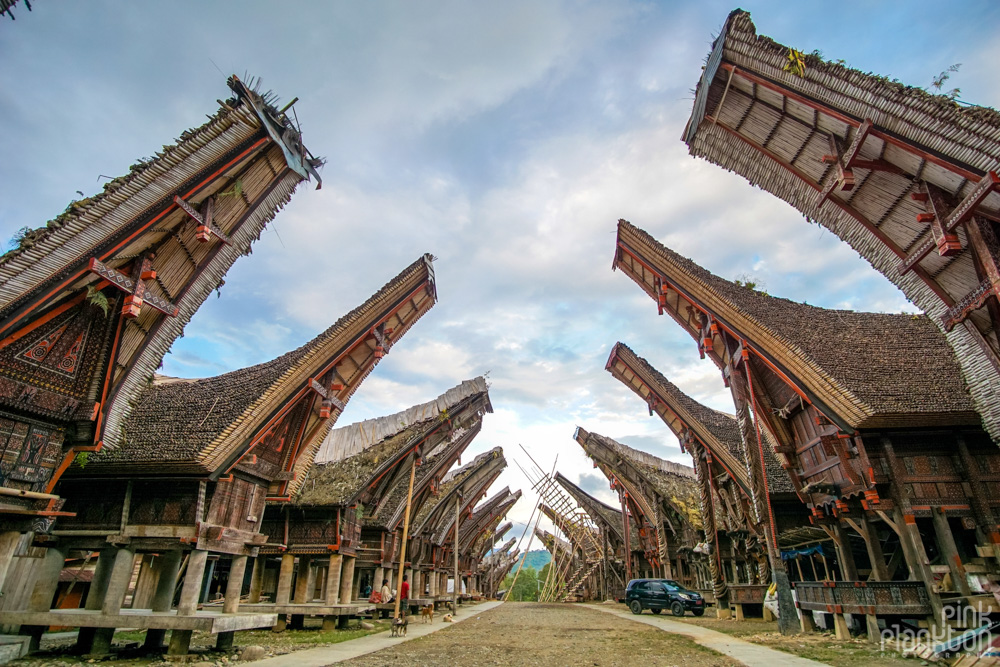 This is how a typical family's tongkonan are laid out. 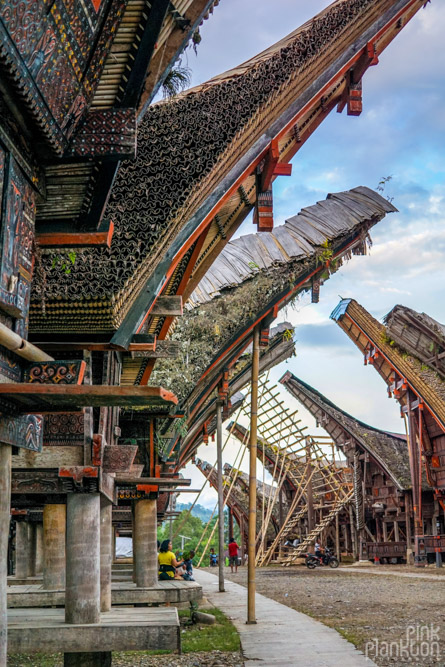 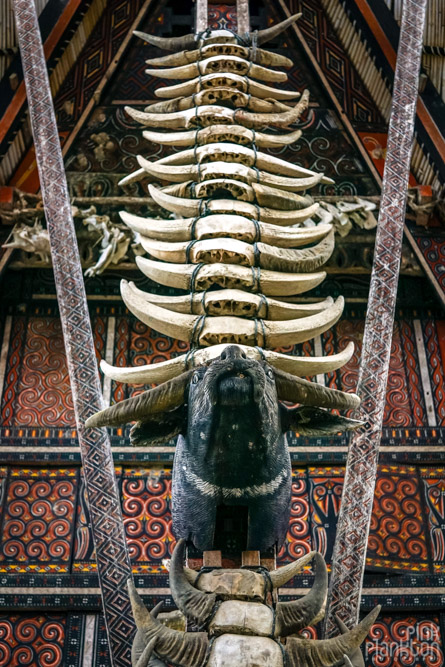 Buffalo horns are stacked up the houses.  This is also a sign of status and wealth.  Buffalo are sacrificed during a funeral ceremony.  One buffalo can cost up to $5000USD, and numerous are often sacrificed at just one funeral.  A very wealthy family might sacrifice up to 25!  Many families go into debt paying for funeral costs.  It is a huge controversy whether so much money should be going towards ancient beliefs, when it could be put to other uses. 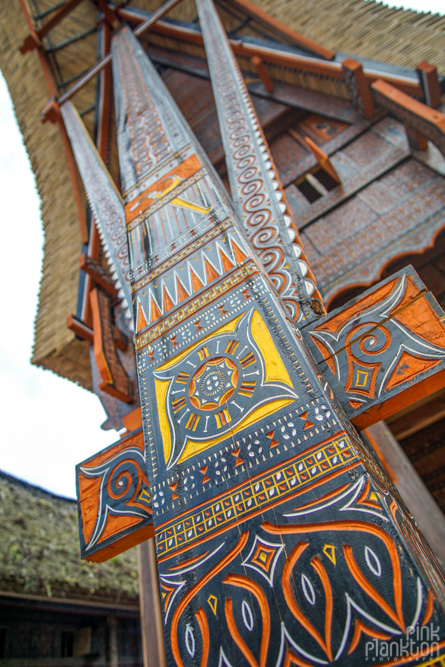 The houses are also very intricately designed and painted. 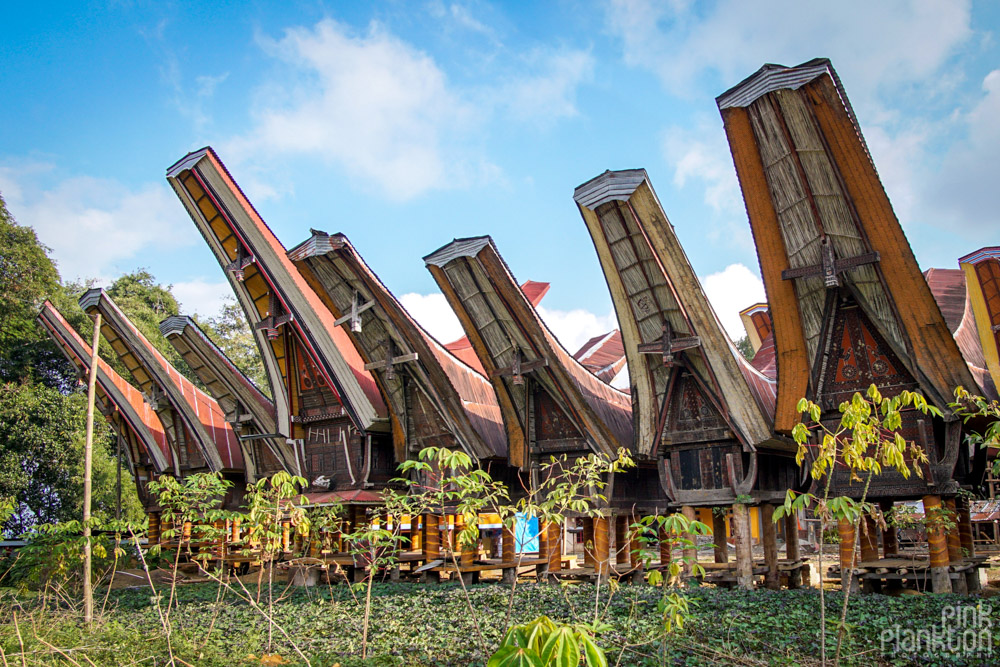 More views of tongkonan houses everywhere you go!  They are so beautiful. 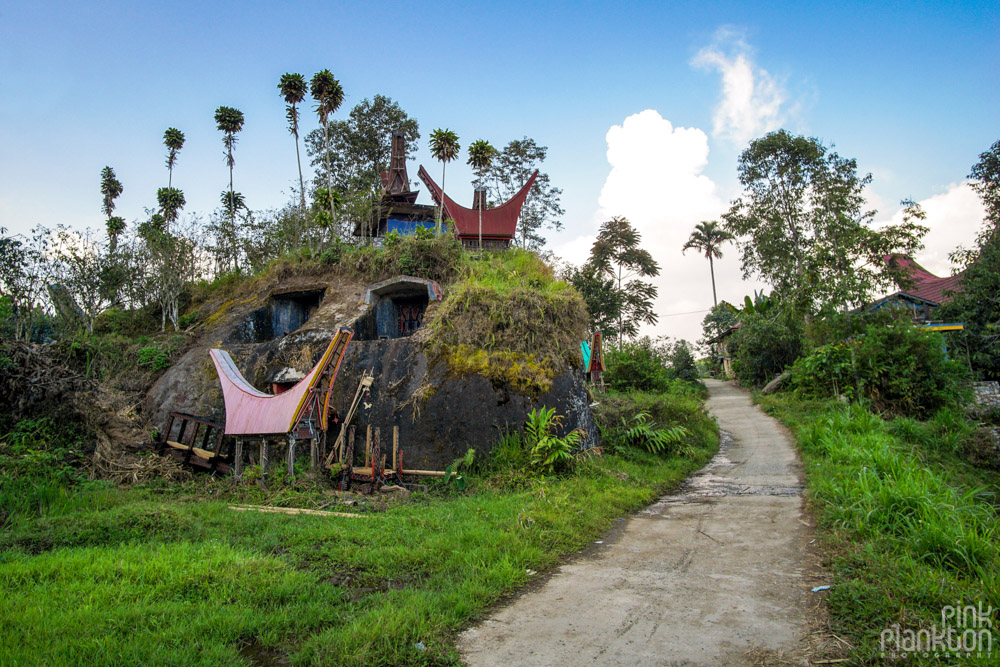 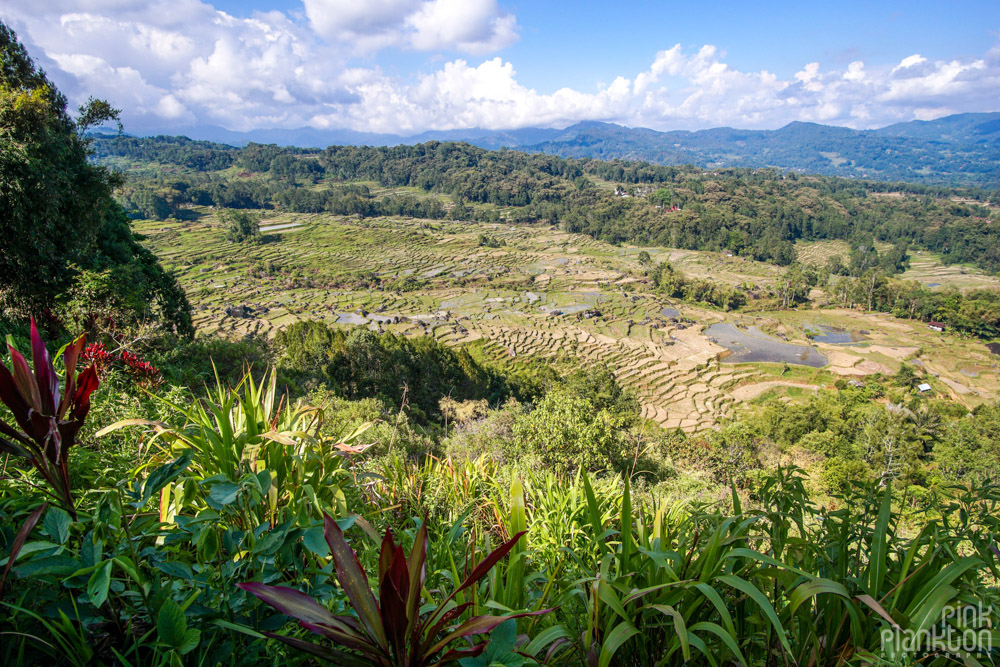 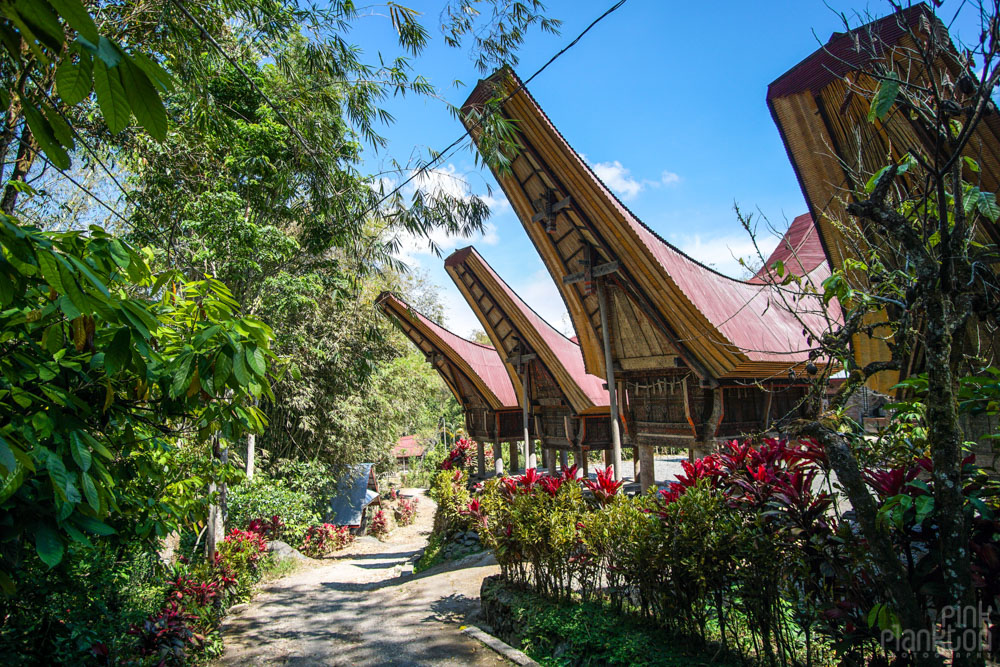 Although I didn't attend a funeral ceremony during my visit here, I was happy to get a glimpse into to Toraja people's beliefs.  Death is literally treated as the most important thing in life here.  When someone dies, they are not gone, they stay with you and your family long after, both physically and spiritually.