The Parthenon of El Negro: An Abandoned Corrupt Cop’s Mansion

Mexico has many amazing abandoned sites, but none have a story quite like this.  Arturo Durazo Moreno, also known as "El Negro", was the Chief of Police in Mexico City from 1976 to 1982.  Although his salary was less than $1000 USD/month, he was making a lot more on the side through bribery, extortion, corrupt deals, and his involvement with the drug cartel.  El Negro spent his extra money on a number of lavish mansions, one of which was this one on the Pacific Coast, in the town of Zihuatanejo.

As you can see, he had the place built to resemble the Greek Parthenon.  It was basically his playhouse. Extravagant parties fueled with drugs, prostitutes, and other sinful activities, were held here.  It is odd walking through this place, knowing what once went on in here.

Eventually in 1982, Mexico's newly elected president, Miguel de la Madrid, came into power wanting to put an end to corruption.  El Negro fled the country but was found a couple years later and charged with tax evasion, extortion, smuggling and possession of illegal weapons.  He was sentenced to 25 years but only ended up serving about 8 as he was released on bail.  He passed away in 2000, but his Parthenon remains as a symbol of the ongoing corruption battle in Mexico.  For a more detailed account of his life, check out this article in The Guardian.

I visited the Parthenon in December of 2020.  The site is very easy to get to, the location can be found on Google Maps.  It is a short cab ride up the hill from the town center.  If you are driving up the main road yourself, look out for steep dirt road turnoff next to a National Guard military base.  When I went, there were a few cars parked here on the side of the road.  It didn't seem like there was any room for us to park, but a National Guard officer said we were okay to park behind some cars.  Don't be threatened by the National Guard, they are used to visitors.  Once you are here, hike up the steep dirt road which will lead you to the entrance gates.  At the time a guy came out and charged us 50 pesos per person to enter (about $2.50 USD).  We went just before sunset on a weekday and there was only one other group of people there.

Here are some photos I took: 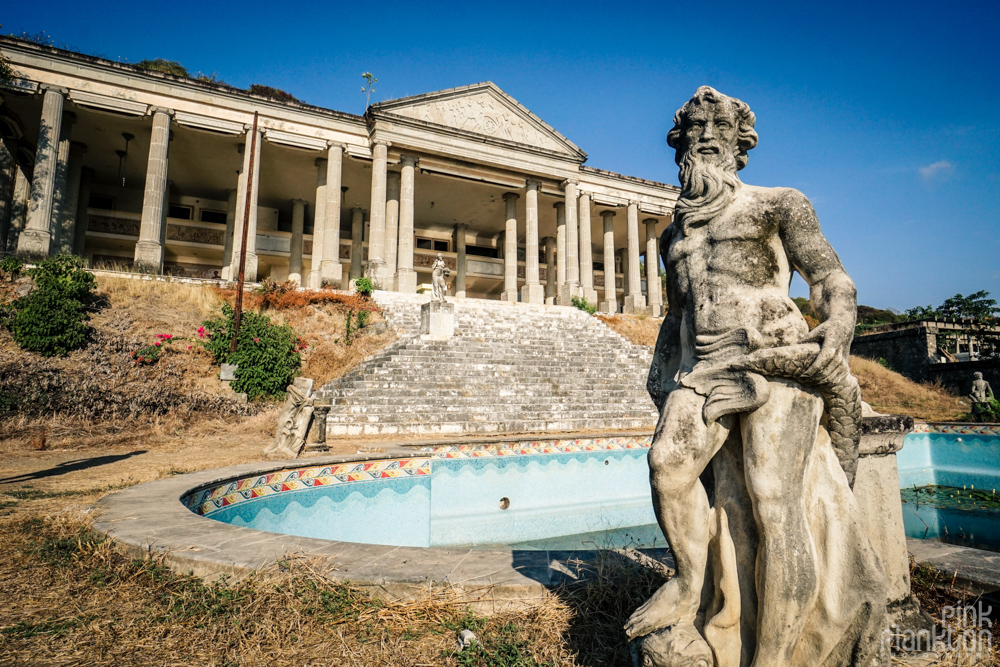 The Parthenon from the front. Greek statues are scattered throughout the property. 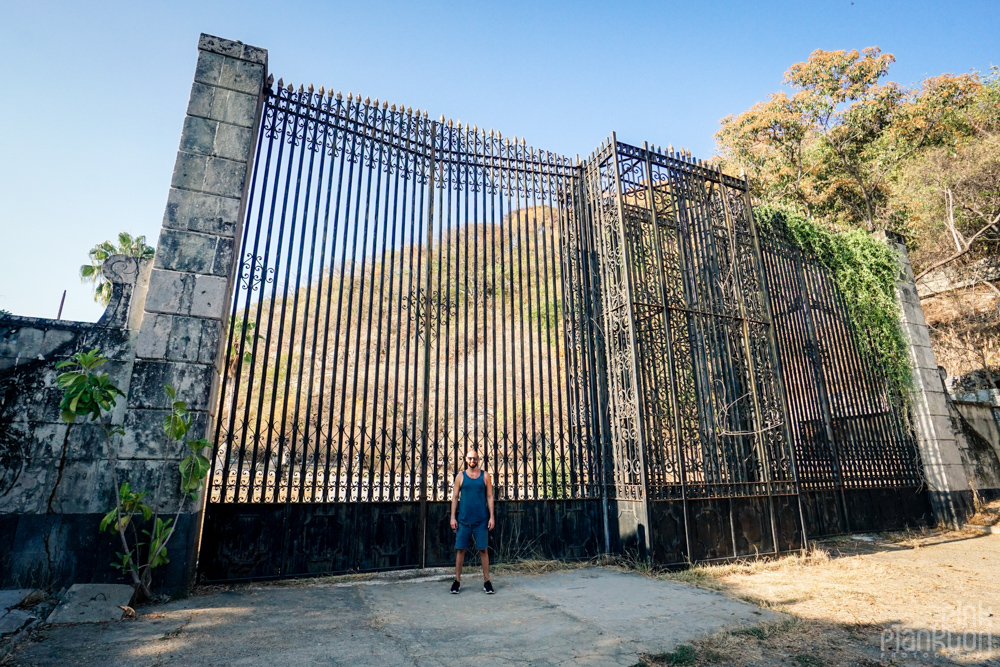 These are the front gates. High enough, no? 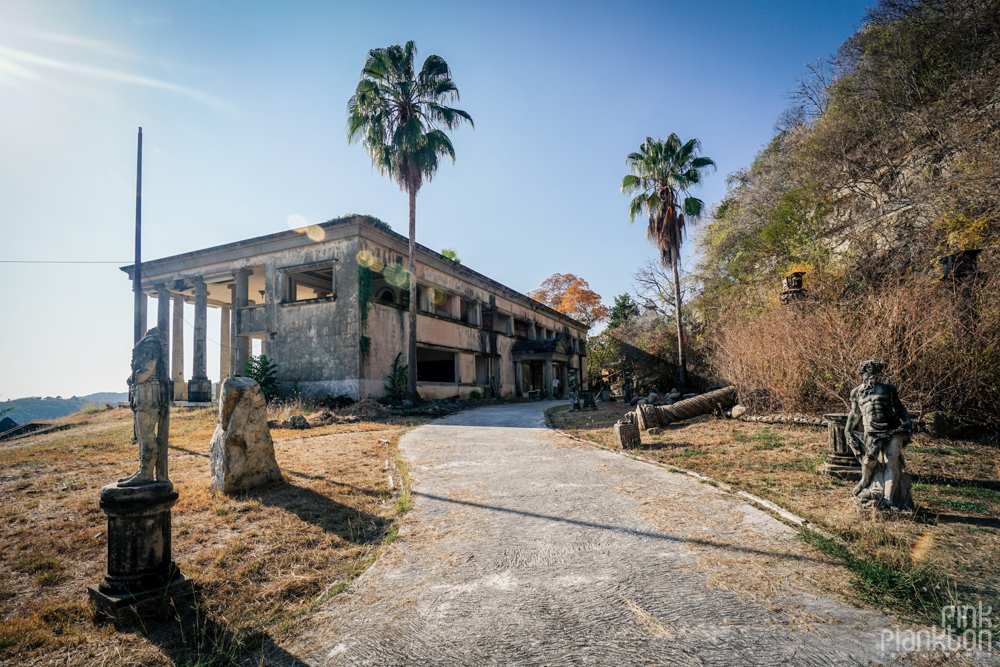 This is the path leading up to the house right after you enter the gates.

Some of the Greek statues are beheaded. 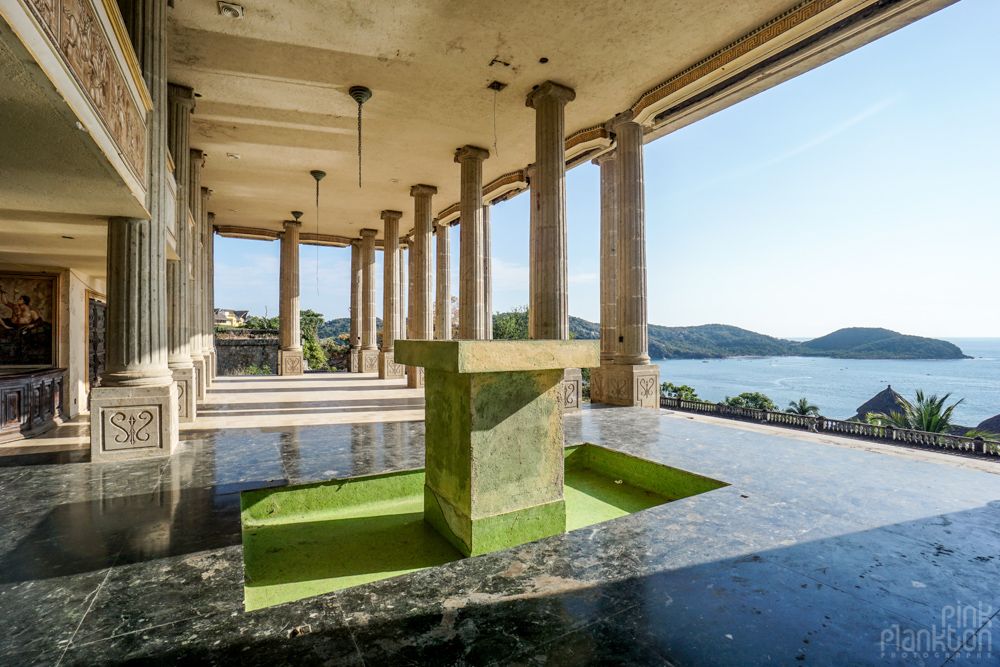 This is the main area.  Very open concept. 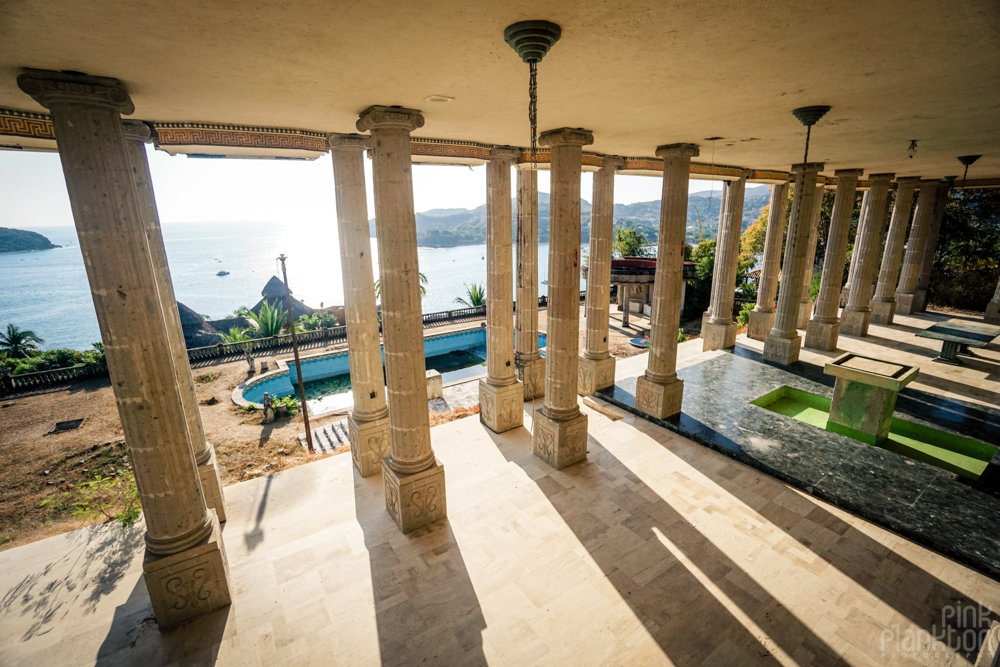 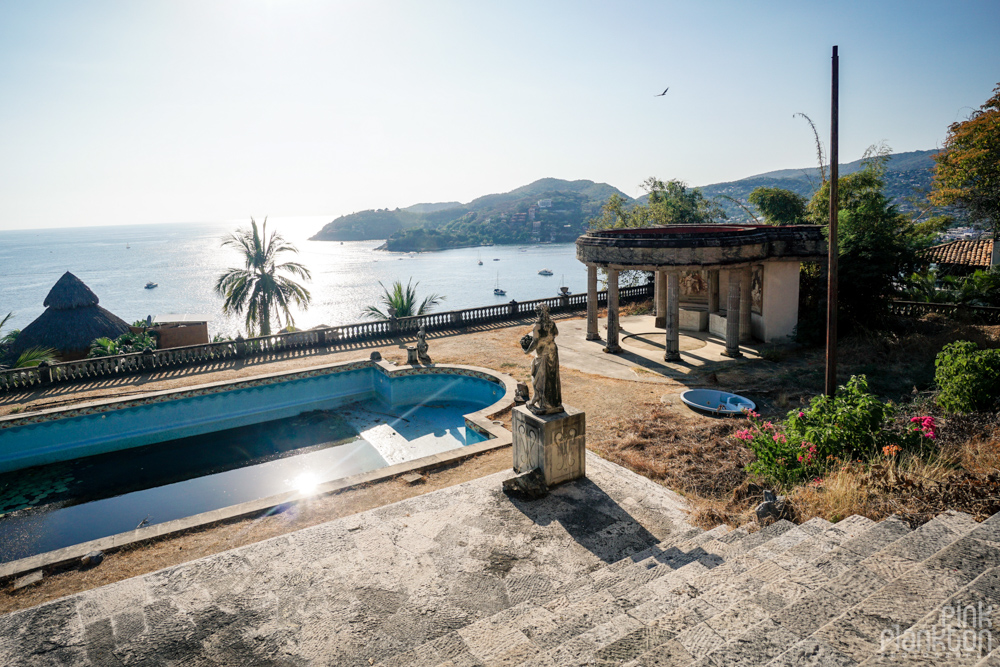 The view from the house. 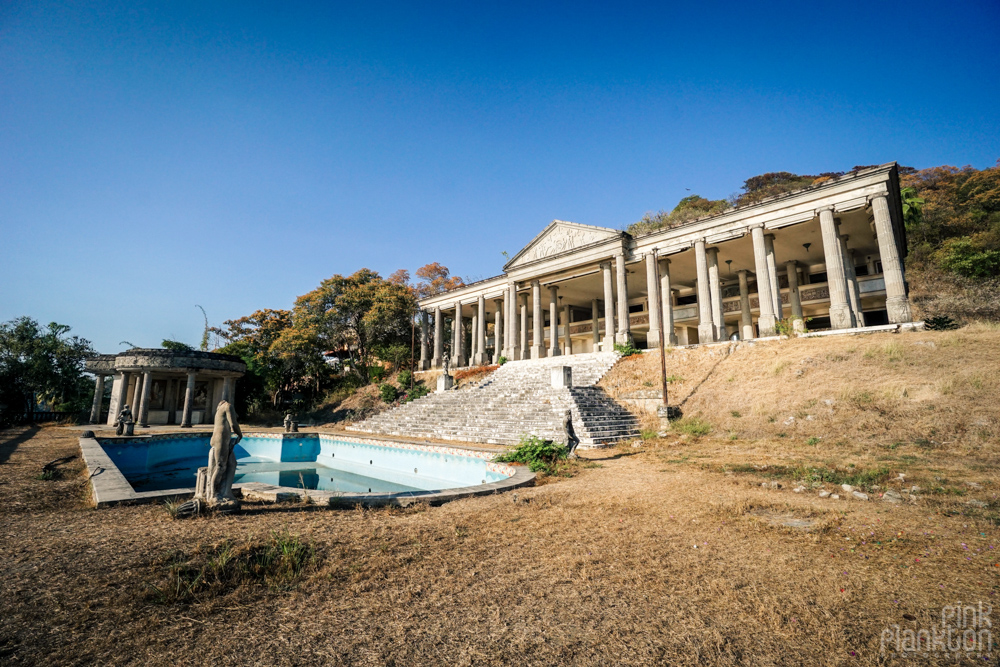 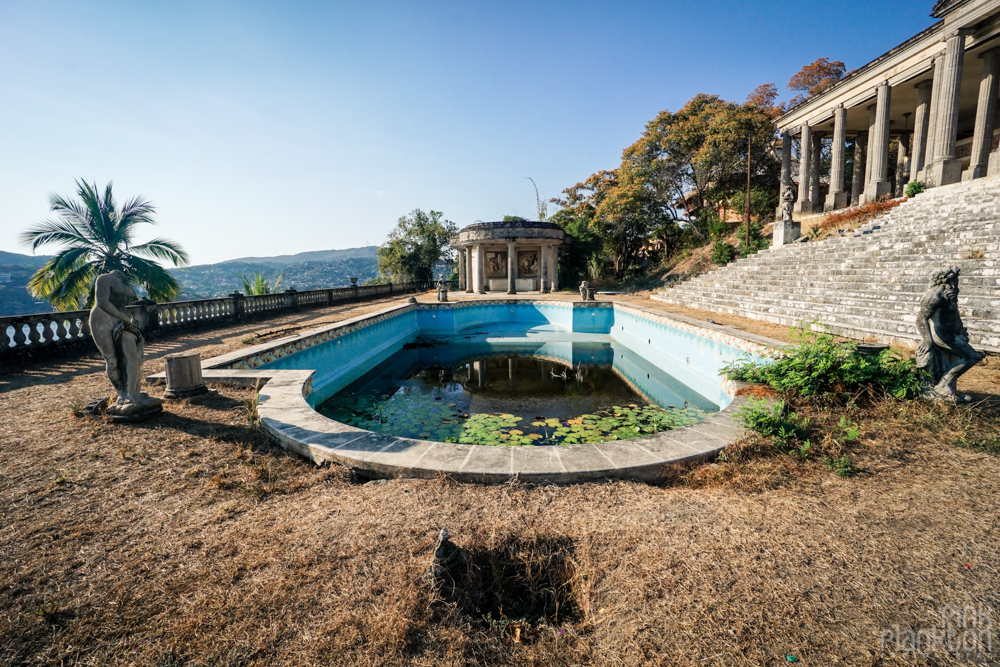 The hole in the foreground is supposedly a secret tunnel so guests could quickly escape from inside the house if needed. 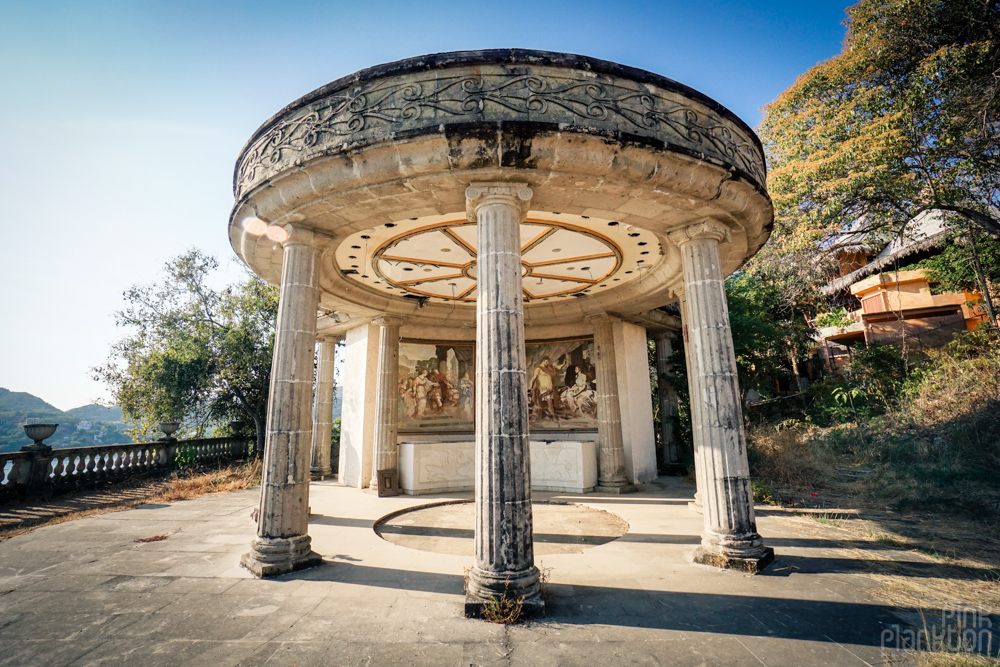 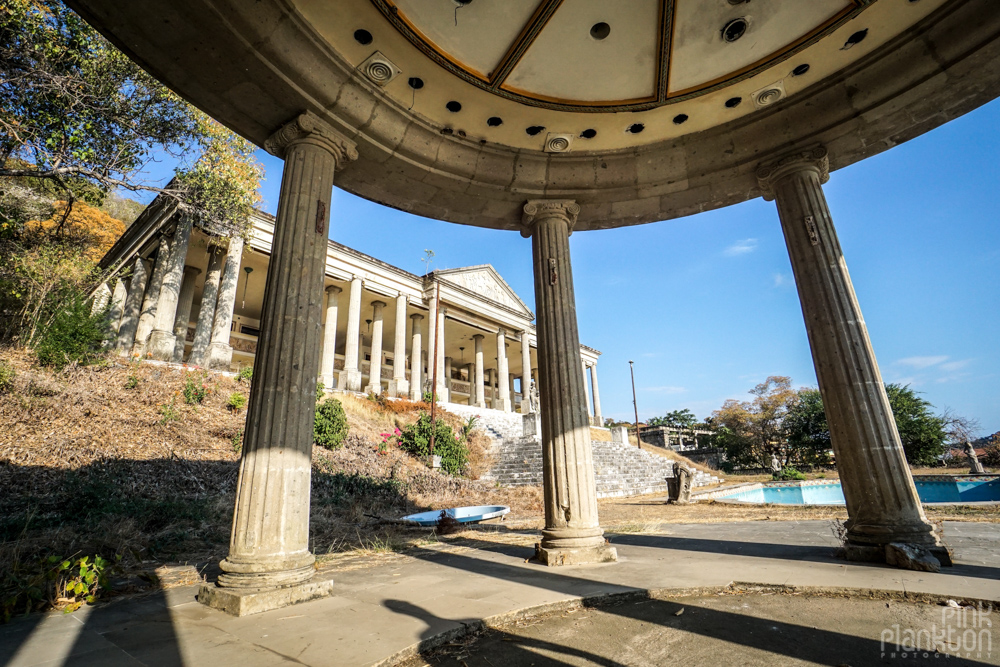 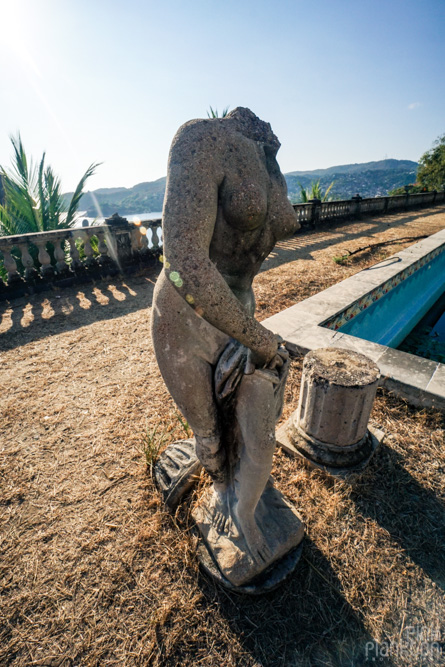 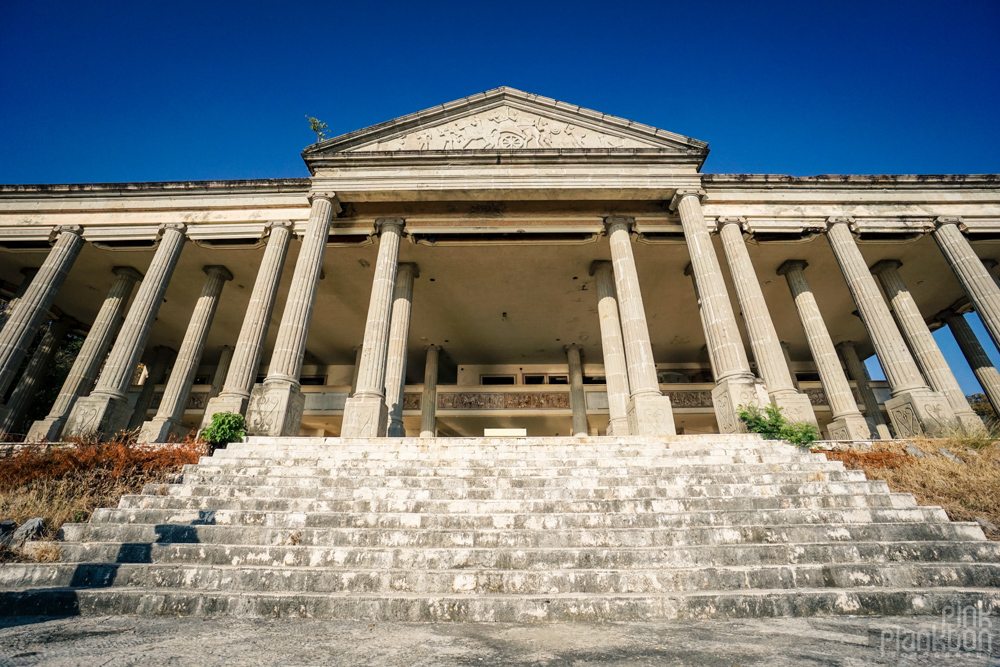 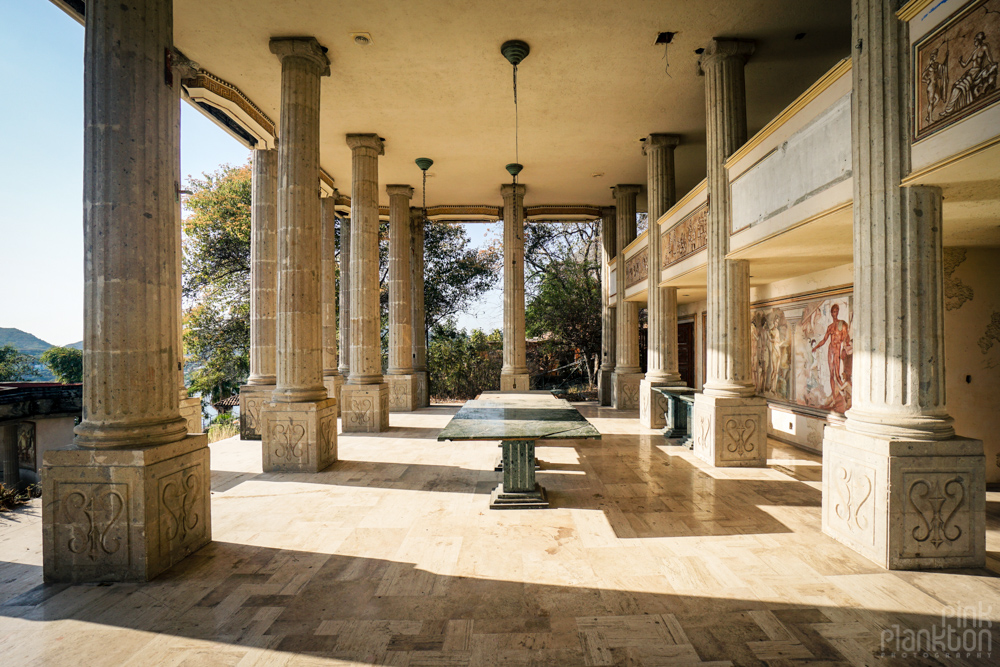 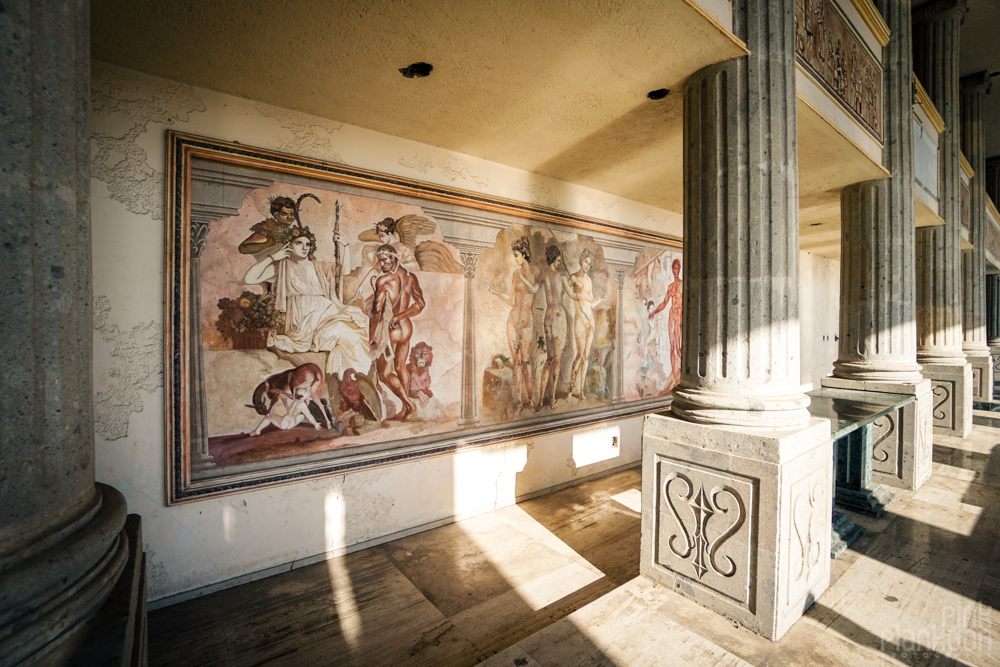 There are some questionable scenes depicted in the art... 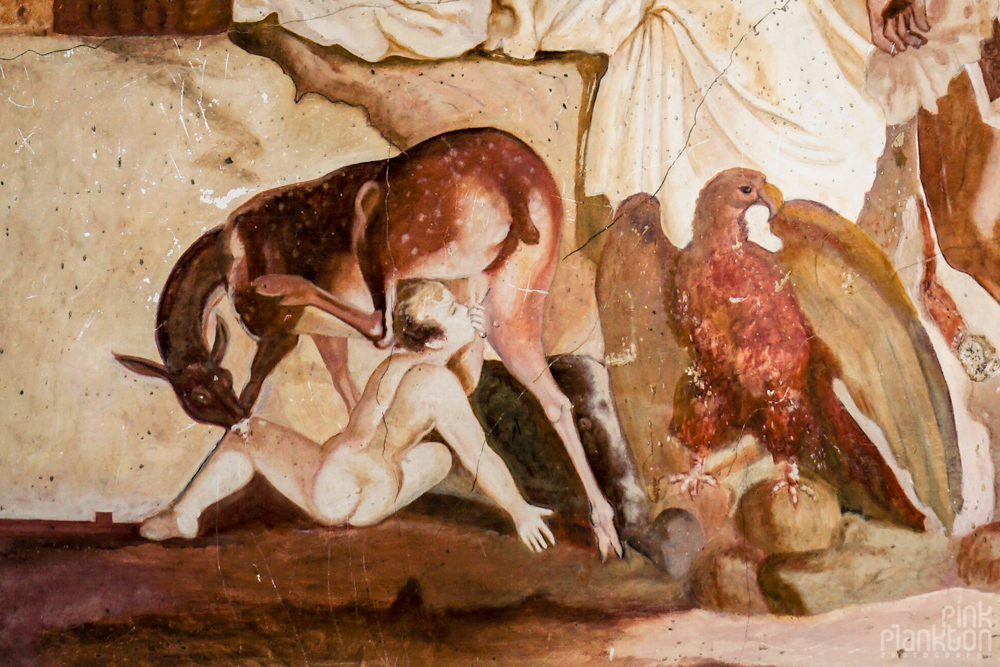 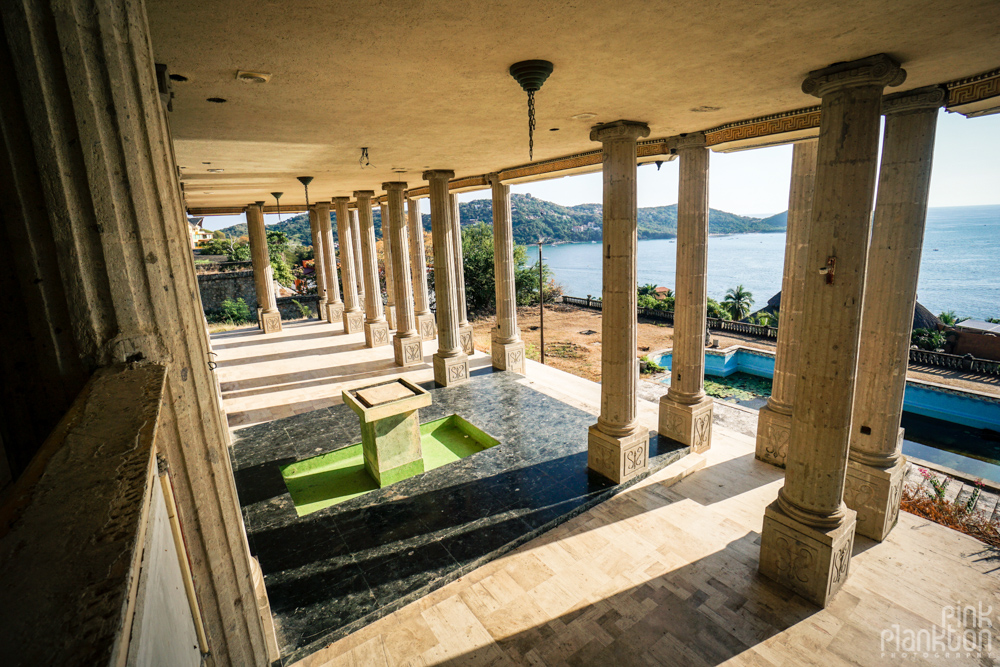 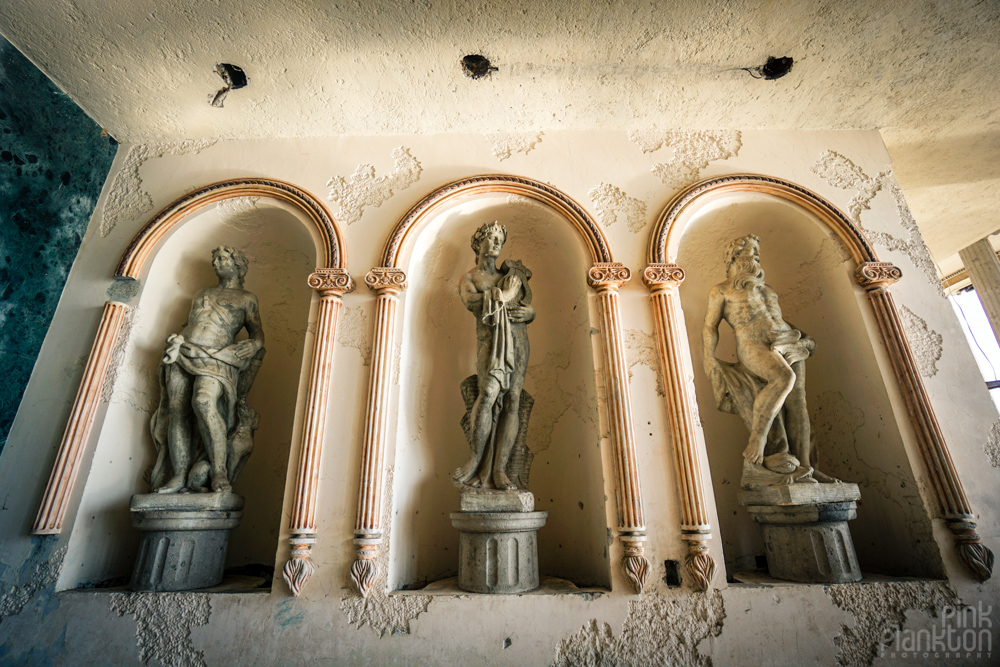 Inside the many bedrooms. 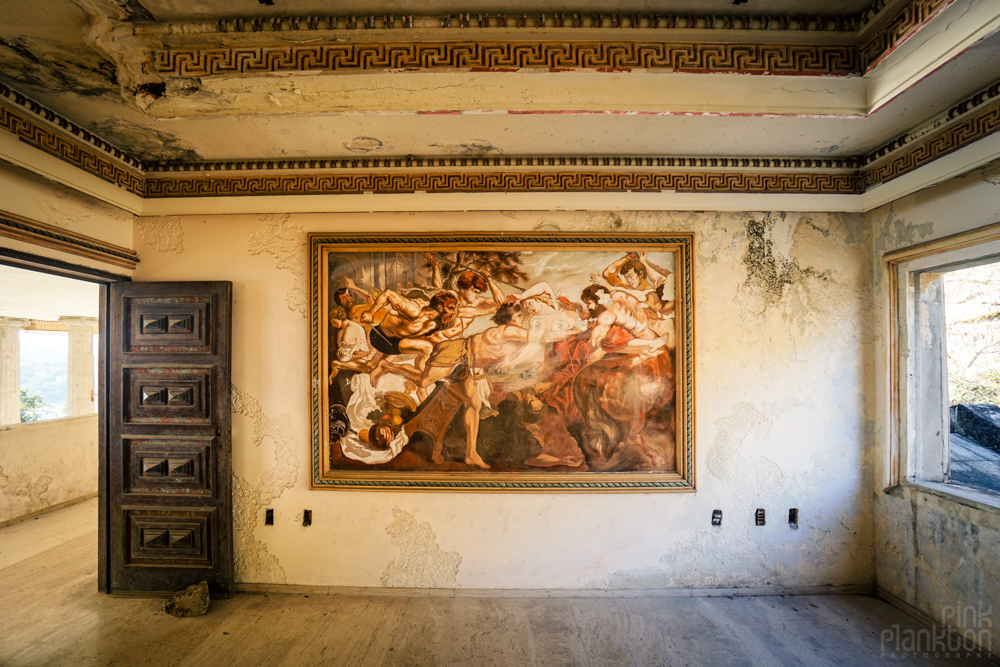 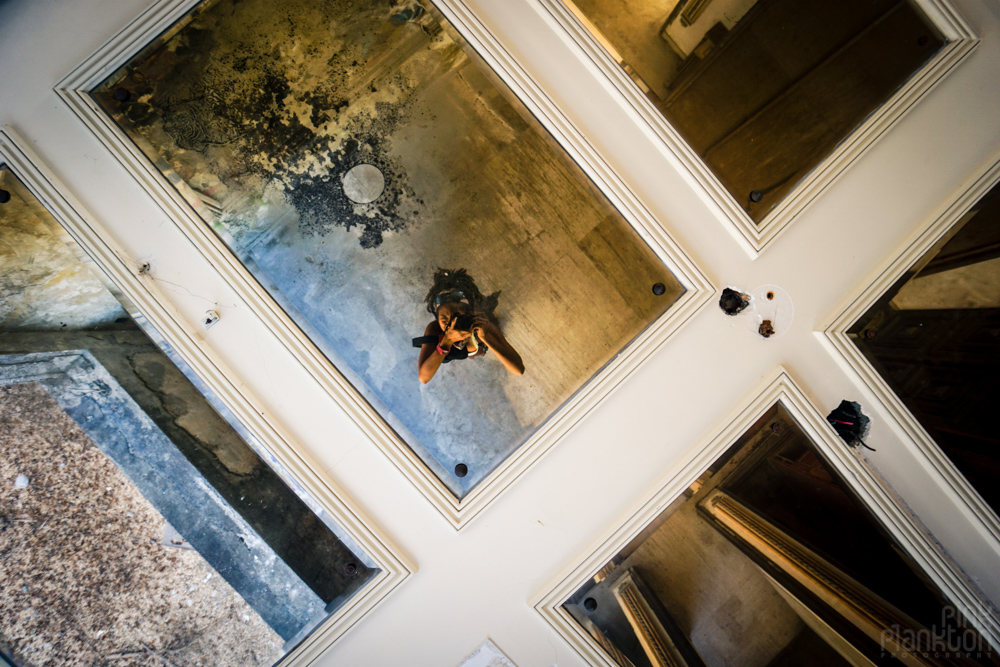 The bedrooms had mirrors on the ceilings, which says a lot about what went on in them. 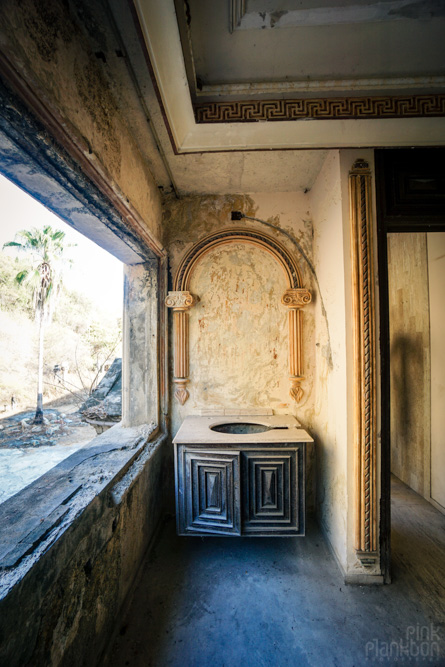 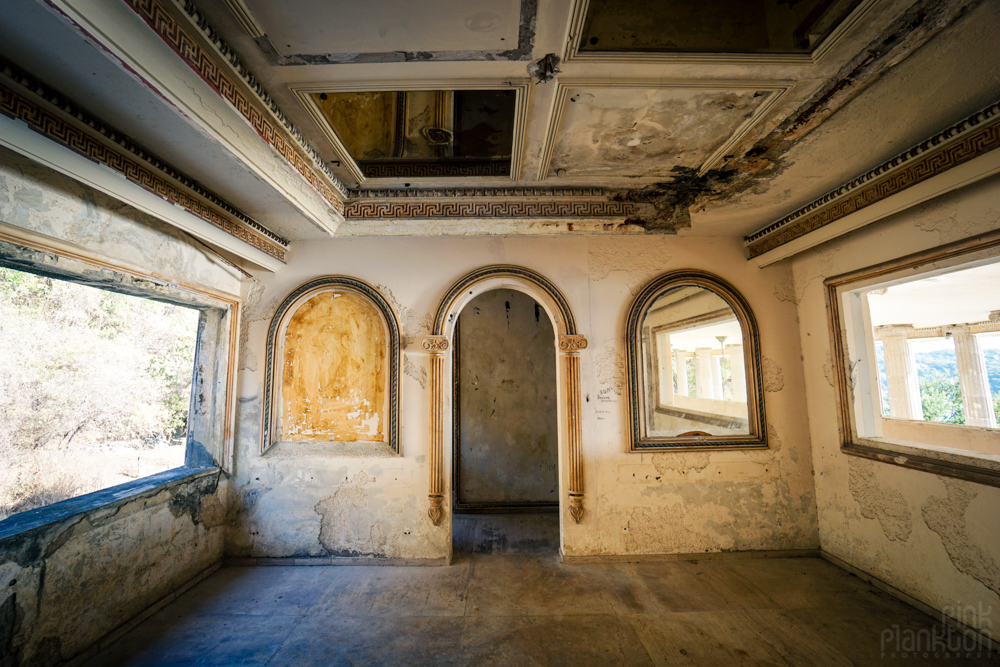 The rooms are pretty bare as most of the furniture and other belongings were looted. 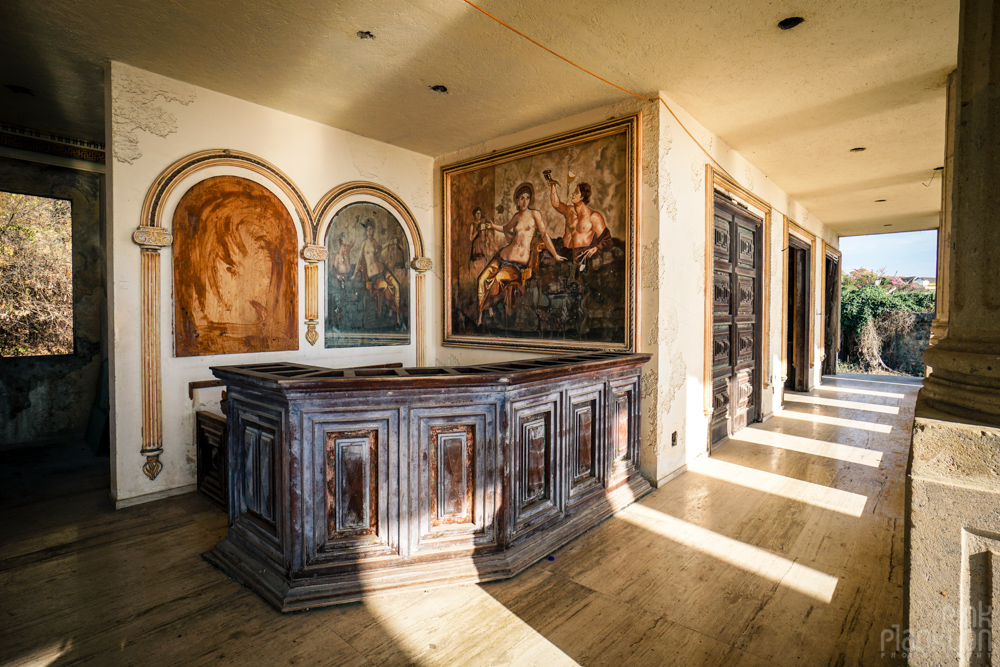 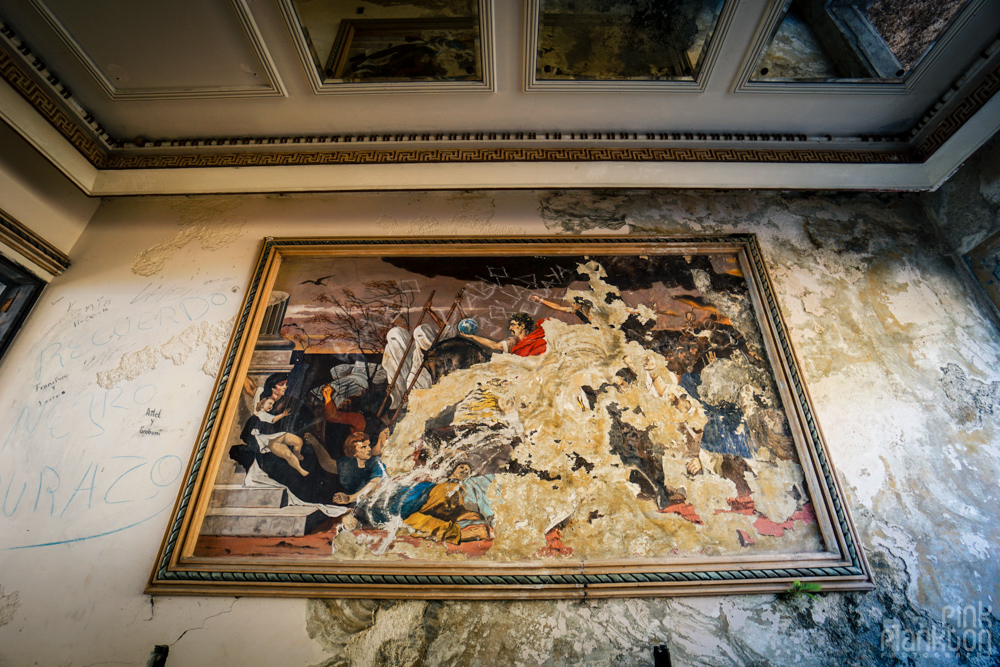